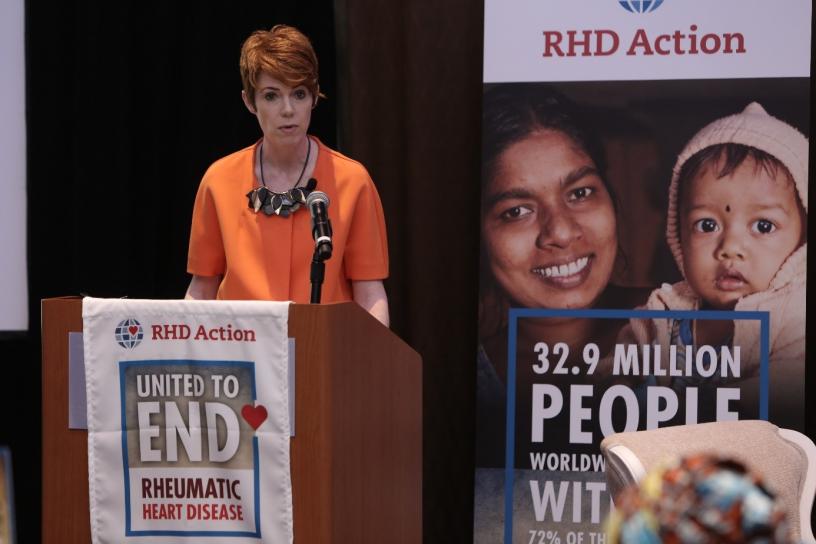 On 29th September 2015, the RHD Action movement was launched in New York, with the aim of reducing the burden of RHD in vulnerable populations of all ages throughout the world. The launch event, coinciding with World Heart Day and the United Nations General Assembly, was moderated by Leith Greenslade, then Vice-Chair with the MDG Health Alliance at the Office of the UN Special Envoy for Health.

Ahead of country discussions regarding a WHO Resolution on ‘rheumatic fever and rheumatic heart disease’ in Geneva in May 2018, the RHD Action team caught up with Leith to discuss the work of the organization she founded, JustActions, the impact of RHD on maternal & child health, and the partnerships the RHD community needs to build to help tackle this preventable disease.

Could you tell us about the work you’re doing at JustActions?
I founded JustActions in 2016 so that I could really zero in on the ten issues that I concluded - after many years of working in international development - are most critical to the progress of our planet. And by progress I mean a sustainable future that offers opportunities to every child to achieve their full potential, no matter where they are born. I also wanted to branch out and move beyond health as I’ve learned over the years that health is dependent on so many other things and very often you can’t solve a health problem by improving a health service. There are so many other areas which impact on health, such as poverty, education, gender discrimination, innovation, the quality of country leadership etc.

At JustActions, we are interested in really smart, breakthrough solutions. We work with all kinds of organizations who really want to push the envelope and take risks, think big thoughts and experiment. I’m also obsessed with getting more attention to neglected issues that are really causing a lot of unnecessary misery - RHD fits into this category.

How were you first involved in the work of RHD Action?
Prasanga Lokuge, who was working with Medtronic in 2015, really persuaded me to take RHD seriously when I was working with the UN Special Envoy for Health. It was not on my radar at the time.  I was very focused on infectious disease deaths among women and children.

The more I learned about RHD, the more ashamed I was that I hadn’t known more about it, when it was clearly having an impact on maternal and child health outcomes. The Senegal study that showed 36% of pregnant women with RHD who were admitted to hospital died and the South African data that shows 41% of indirect maternal deaths are caused by heart disease. These studies really affected me.

Now I think RHD is an issue that every maternal, newborn & child health advocate should be aware of.

The other angle on this – to be totally candid – is that I’m Australian, and I saw that a lot of RHD research and advocacy was coming out of Australia, particularly working with the indigenous communities. As an Australian I felt a sense of pride, but also a responsibility to know more, and to be more active in this space.

How do you see RHD as a global development issue?
What really interests me about RHD is that it sits at the intersection of infectious diseases and the growing chronic disease agenda. There are very few issues like this – HPV is another one. They are bridge issues, which is really, really critical at a time when the infectious disease and NCD disease communities are siloed - and often in direct competition.  We need to show that we can work on infectious diseases and NCDs at the same time and have a big impact and RHD provides an opportunity to do that.

In the past issues like RHD have fallen between the cracks of the infectious diseases agenda and the chronic disease agenda. Under the SDGs we have to tackle both, so this is no longer acceptable.

The other thing for me is that RHD disproportionately affects pregnant women and children. If you look at the burden of disease, it really hits women of reproductive age and their children hard: 36,000 deaths in 2016, most of them preventable. I was shocked to see that RHD kills twice as many women aged 15-49 in India as diabetes, and almost as many as HIV/AIDS. So anyone with an interest in women, development, economic empowerment, maternal health: they need to be aware of RHD.

RHD comes full circle in terms of the life cycle. The little girl who contracts the infection in childhood grows up to experience its devastating effects in her first pregnancy which in turn threatens her baby's health and development. Insidious.

It is also an issue that affects every country - not just Africa or Asia. Countries such as the US, and also Canada and Australia – where RHD really affects Indigenous communities – often have just as much to do to get this disease under control.

What partnerships do you think the RHD community needs to build to strengthen the prevention and control of this disease?
So we have a big challenge here – the RHD community has to be equally influential in the infectious disease and chronic disease communities and bring them together.

Firstly, you have to have deep country roots - especially in the countries with very heavy burdens of RHD. Previously people would begin a new partnership at the global level and expect the work to trickle down.

You have to really persuade national, and in some cases subnational governments that RHD is an important issue that they need to pay attention to. You also have to find country champions who will fight for RHD – Ministries of Health, local leaders, activists. You have to mobilize these communities, and then build from there. RHD also needs regional penetration – for example ensuring that RHD is on the agenda of the African Union and ASEAN.

At the global level, there are also many groups that need to be aware of what you are doing: certainly all of the NCD actors engaging around the UN High-level Meeting on NCDs and the powerful network of organizations working on advancing women, children's and adolescents' health. I very much see RHD as a women's health issue. There are also emerging private sector players such as the Resolve partnership that Bloomberg Philanthropies, the Bill & Melinda Gates and Chan/Zuckerberg Foundations are funding to focus on cardiovascular diseases – RHD needs a presence there.

It is also increasingly important that international organizations such as the World Bank are aligned and aware of this work, and clearly you need to be cognizant of the antimicrobial resistance movement. Rheumatic fever and RHD are treated through the use of the powerful antibiotic benzathine penicillin G (BPG), and there is great concern now about overuse of antibiotics.  This of course should not undermine access to antibiotic treatment for people who have been denied it.

I want to applaud you for the partnership you have built to advance RHD – RHD Action - because it has been set up in a very careful way, with deep local roots. I think you are well placed now to make the regional and global connections to some of the bigger health movements that can help you maximize your impact.

Most Resolutions have a greater chance of success if they have the support of a very engaged Member State or group of States behind them who hold WHO and other stakeholders’ feet to the fire. Otherwise it’s just words on paper.

What is the one thing people need to know about RHD?
I want people to know that it is a major, hidden cause of death and disability for pregnant women and newborns. I don’t think that people associate RHD with poor newborn and maternal health outcomes but it’s an insidious threat for many reasons. For example, RHD symptoms mimic the breathlessness that many women feel in the late stages of pregnancy and so they can easily miss the seriousness of the situation. RHD can go completely undetected until it’s too late. This is one of the reasons why RHD kills so many women aged 15 to 49 - 36,000 in 2016 alone.

When people think of RHD, they should think of a woman in late pregnancy – ready to deliver what she thinks is a healthy baby – who loses everything - her baby  and her health because she didn’t know she had RHD. This makes RHD very vicious.