Landmark WHO Report on RHD ahead of Global Discussions 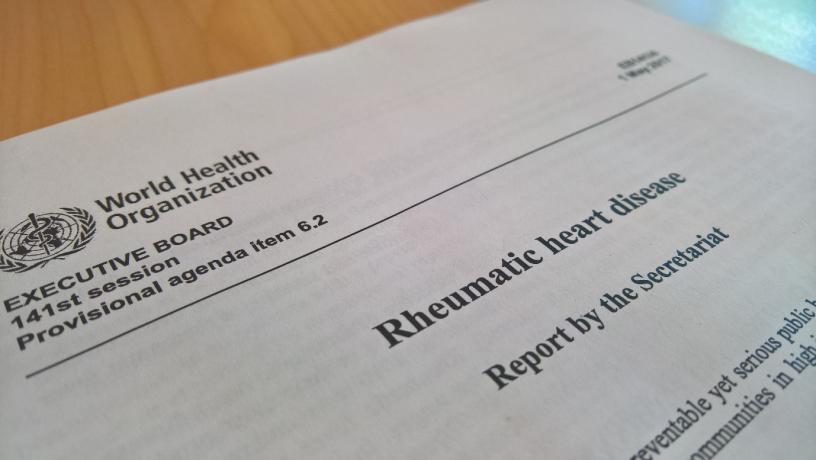 A landmark report on rheumatic heart disease (RHD) – drafted by the World Health Organization (WHO) – has been released to accompany intergovernmental discussions on RHD during the upcoming WHO Executive Board meeting, which takes place in Geneva at the beginning of June.

Highlighting RHD as an important development issue for Member States, the report outlines the burden of RHD across all WHO regions, and provides an overview of barriers to progress on RHD prevention and control, action taken by WHO to date, and recommended future actions for governments and WHO.

The report places the upcoming discussions on RHD in the context of existing regional and global policy frameworks, such as the Addis Ababa Communiqué on Eradication of Rheumatic Heart Disease in Africa, the WHO's Global Action Plan for the Prevention and Control of Non-communicable diseases 2013–2020, and the Sustainable Development Goals.

The report also draws attention to current barriers to progress, highlighting in particular inadequate financing and health worker training, a paucity of data, and inaction on the social determinants of RHD. Underlining the need to improve access to primary and secondary prevention, the report describes securing a reliable supply of BPG as a ‘significant challenge in some settings’.

Nevertheless, the report strikes a more optimistic tone as it notes the achievements of the previous WHO Global RHD Control Programme, which ran from 1984 to 2000 and reached 1.5 million children.

Among the recommendations included in the report are calls for national RHD programmes, awareness-raising, health workers training and increased international collaboration.

Read in full the WHO Secretariat Report on Rheumatic Heart Disease

Get involved!
RHD Action has launched the #TimeToTackleRHD campaign as we believe that RHD has been ignored by global decision-makers for too long.

Everybody has a role to play – download the campaign Starter Pack here to learn more.