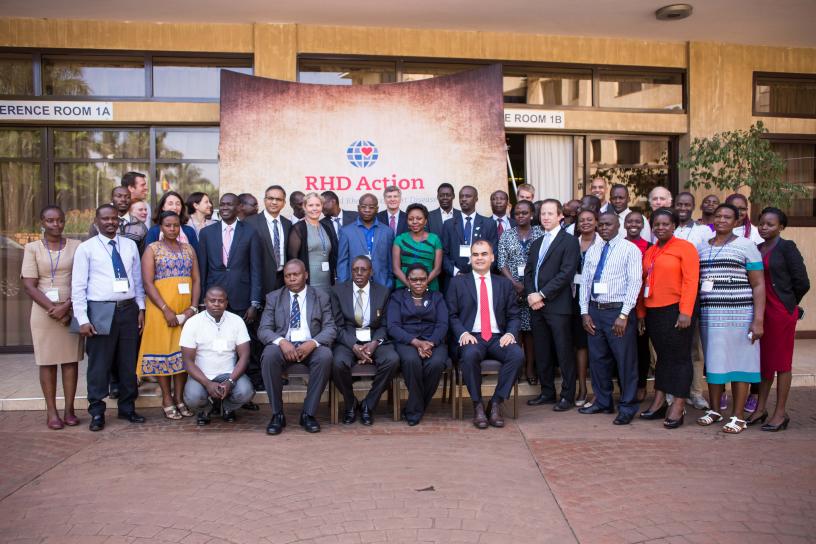 “RHD is a big problem here – it causes a lot of mortality. We have convened this meeting to find a way forward”, said Dr Emmy Okello, adult interventional cardiologist at the Uganda Heart Institute, in his opening remarks to the RHD Uganda Stakeholders’ Meeting.

Taking place from 2-3 November 2017 at the Protea Hotel in Kampala, Uganda, the meeting was held to both review progress achieved in delivering RHD services throughout Uganda in recent years, and also to give attendees an opportunity to discuss how they could engage new partners in the fight against rheumatic heart disease (RHD). The meeting was co-organized by a number of partners, including the Uganda Heart Institute (UHI), RHD Action, Children’s National Medical Center, and Case Western Reserve University.

Ministry of Health of Uganda Pledges Support for RHD
Echoing Dr. Okello’s comments, Dr. John Omagino, Executive Director of UHI, called on participants to redouble their efforts to tackle RHD: “RHD is such a big issue – if we don’t continue to prevent it, all our good work so far is lost”. He set out the vision of the Uganda Heart Institute, to be a global centre of excellence in the prevention and care of cardiovascular disease and RHD. 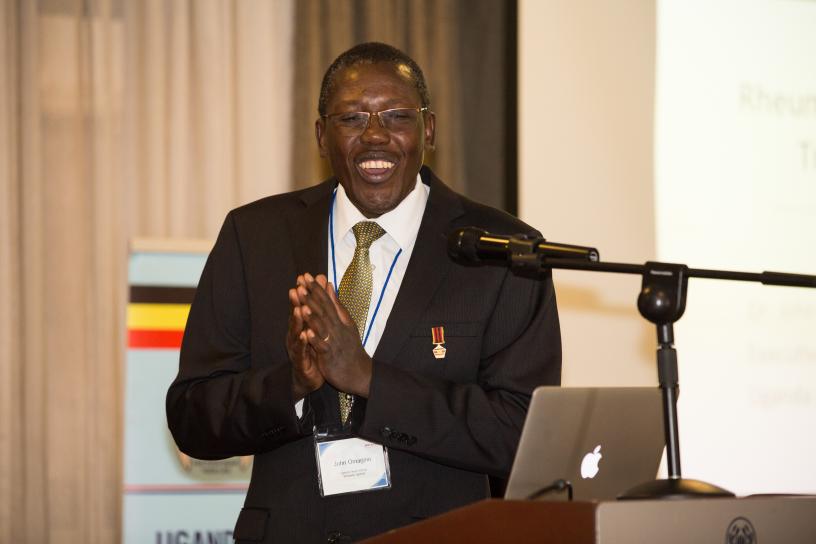 This introduction was followed by Dr. Marco Costa, Vice-President and Chief Innovation Officer at University Hospitals Health System, who drew attention to the need for wider-reaching RHD services: “Many people suffer the consequences of poor treatment and access to services when they are a child. The battle of RHD is not in the hospital. It is in schools and through treatment in health clinics”.

The first session of the meeting concluded with strong pledges of support from two representatives of the Ministry of Health of Uganda: Dr. Charles Olaro, Director of Health Services at the Ministry of Health of Uganda, and the Hon. Dr. Joyce Moriku, Minister of Health. “All of us are aware that RHD is preventable. And this is the way that we want to go”, said Dr. Olaro, adding that new partners, clear protocols and empowered health workers would be essential to continued progress. 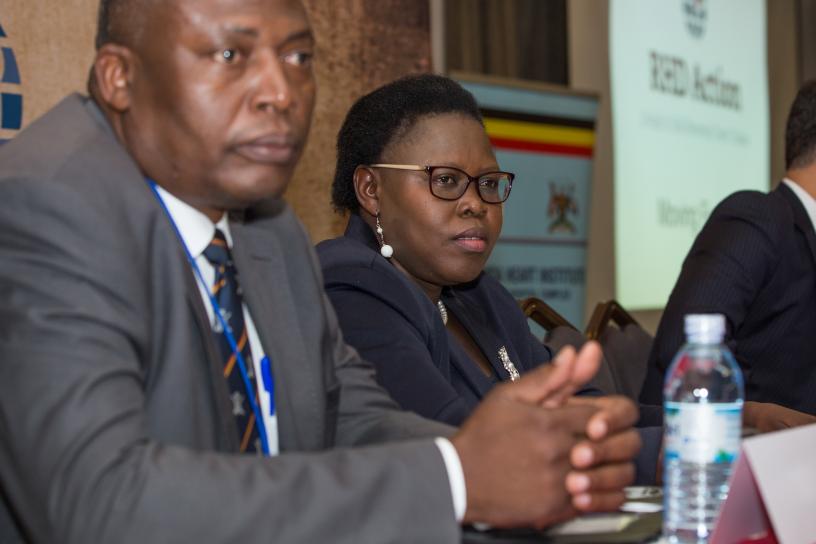 The Hon. Dr. Moriku highlighted the vulnerability of those suffering from RHD: “RHD remains a highly prevalent, but preventable, heart condition. Our children and young people are the ones most affected”. She praised the work of the Uganda Heart Institute in tackling the RHD burden, saying that this provided a springboard for future work: “It is our ultimate goal that the Ministry of Health will build on this programme to establish CVD and RHD centres around the country and an RHD national control programme”.

Progress in RHD Care
The meeting’s second session was comprised of a range of speakers, who addressed progress achieved in delivering RHD services in Uganda. The first speaker was Flavia Kamalembo, a cardiac nurse at UHI who is also a person living with RHD. Her presentation encompassed both of these viewpoints, as she addressed both the stigma and social pressure of an RHD diagnosis, particularly for potential mothers, and also her sadness at caring for RHD patients: “My worst days as a nurse are when someone dies of RHD – it could be prevented, we could stop many more from getting the disease.”

Dr. Andrea Beaton, a paediatric cardiologist at Children’s National Medical Center, then spoke to the national burden of RHD in Uganda. Dr. Beaton noted that – from studies in school-going children – prevalence across Uganda varied from 1.5% in Kampala to 3.7% in Gulu, while higher enrollments around regional centres suggested that access to services played a key role in people seeking care.

Dr. Okello of UHI then provided a summary of the different phases of the RHD control programme in Uganda, from its inception providing registry-based care and case identification,  to research and tertiary care. Dr. Chris Longenecker, Assistant Professor of Medicine at CWRU, then spoke to participants on the integrated programme at the Joint Clinical Research Centre at Lubowa, which sought to leverage HIV/AIDS infrastructure to create a comprehensive RHD treatment program in Uganda. Dr. Longenecker cited a number of lessons learned from this programme, such as the value of patient groups to provide valuable social support, and the possibility to empower nurses to take on more responsibilities.

During the following panel discussions – moderated by Dr. Rosemary Wyber, Senior Technical Advisor at RhEACH – audience members raised key issues such as the need to empower patient support groups and to provide RHD services in rural areas, with the decentralization of diagnosis and care as an essential step to achieve this.

Engaging New Partners in RHD Care
Meeting participants then turned their attention to one of the key themes of the meeting – how to engage new partners in RHD care.

Dr. Nayanjeet Chaudhury, Senior Technical Adviser to the Medtronic Foundation, began the session by providing an overview of his work in public-private partnerships; he stated that these aimed to improve health outcomes among underserved populations, primarily through innovations in existing programmes for acute or chronic care.

Dr Kristen DeStigter, co-founder of Imaging the World, then described her organization’s work to integrate point-of-care ultrasound services into rural health centres. She highlighted the potential of telemedicine, describing how patients received a diagnosis from both non-physician health workers on-site, and from a remote expert, also based in Uganda.

A review of the global market and demand for benzathine penicillin G, the essential antibiotic for primary and secondary prevention of rheumatic fever and RHD, was then provided by Frederick Seghers, Manager of New Market Opportunities at the Clinton Health Access Initiative.  Among other challenges, he noted that improved data to quantify demand and a better understanding of supply dynamics were needed.

A joint presentation from Dr. Beaton and physician-scientist Dr. David Watkins examined the development of new RHD research partnerships in Uganda. They highlighted the expansion in research capacity, a process which accelerated from 2011 to 2017, when over 35 publications on RHD were released.

The Ugandan Role in RHD Advocacy on the World Stage
The final session of the first day focused on Uganda’s role in advocating for RHD to be a public health priority both regionally and globally. Dr. Peter Lwabi, senior consultant paediatrician and cardiologist at UHI, examined Uganda’s progress in the context of the AU Communiqué, a piece of regional RHD policy endorsed by all African Heads of State in 2015, saying: “RHD can serve as a model for how to address diseases across the African continent”.

Jeremiah Mwangi, from RHD Action and the World Heart Federation, then offered a global perspective by underlining the importance of a WHO Resolution on ‘Rheumatic fever and rheumatic heart disease’. Praising Uganda’s role in bringing RHD to the attention of policy makers, he stated that “a global Resolution would give WHO the mandate to work on rheumatic fever and RHD to support countries who want to establish national programmes”.

Public health specialist and head of the Ugandan NCD prevention and control program, Dr. Gerald Mutungi, concluded the first day by describing the Ugandan Ministry of Health’s role in RHD prevention and control. Commenting that he hoped to focus more on health promotion and disease prevention, Dr. Mutungi said: “there is hope that we can eradicate RHD, through a vaccine and early diagnosis of Group A Strep”. He pledged to continue working with the Uganda Heart Institute: “Where they need us, we will be there”.

Breakout Sessions - How to Engage New Partners on RHD? 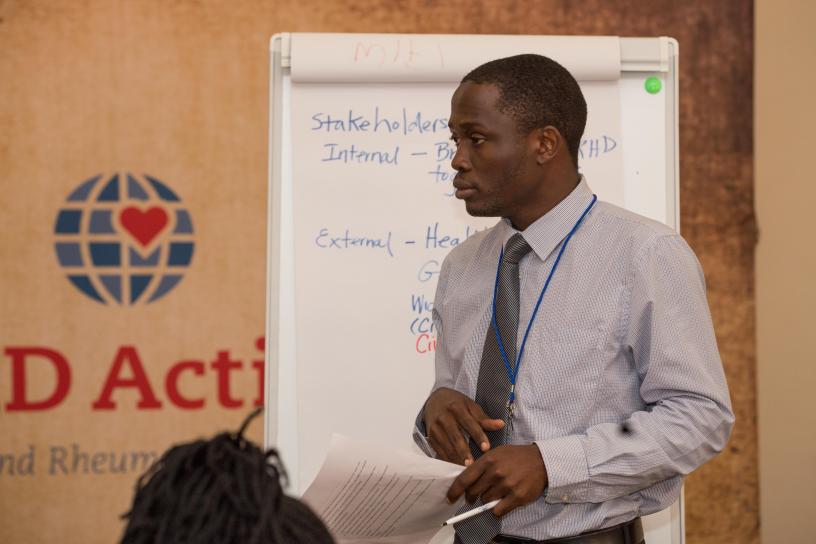 On the second day of the meeting, participants divided into four groups to address the question – how can we engage new partners on RHD? Tasked with coming up with tangible actions, the breakout sessions focused on four topics: child health, maternal health, regionalization of care, and the voice of people living with RHD.

Among the action points emerging from the group on Maternal Health were to contact the Division of Reproductive Health in the Ministry of Health to raise RHD awareness, engage family planning organizations, and to support health workers with more training and education to provide earlier interventions for pregnant women diagnosed with RHD.

Participants who discussed the regionalization of care highlighted the challenges of decentralizing services, such as a ‘brain drain’ of medical expertise from the rural areas to cities and limited infrastructure. They recommended strengthening the relationship of regional services with the Ministry of Health to improve sustainability of regional programmes.

Members of the group debating how to promote the voice of people living with RHD suggested encouraging artists and songwriters to create new health messages, using community gatherings to disseminate information – e.g. churches – and including a patient representative in the East Africa NCD Alliance.

Dr. John Omagino, Director of UHI, then closed the meeting, thanking participants for raising the magnitude of this ‘otherwise forgotten disease’. He praised the progress achieved through the addition of RHD to the NCD agenda and called on national and international partners to continue to work together.