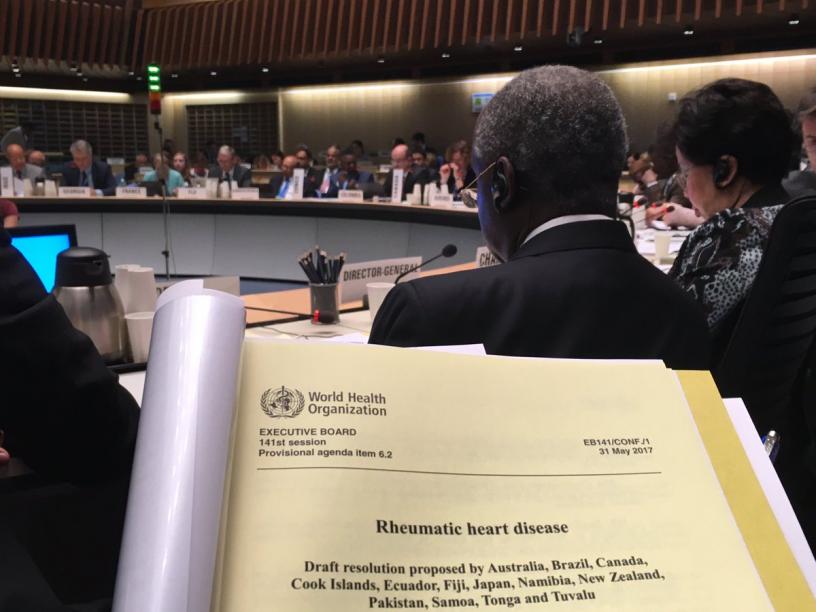 This decision marked a huge step forward for the RHD community: since 2014, we at the World Heart Federation, alongside our RHD Action partners, have been pushing governments and the WHO to develop a global Resolution on RHD, arguing that it deserves to take its place alongside other key public health priorities.

But why do we need a Resolution? What actions does a Resolution contain? And most crucially, how will it affect the care that people living with RHD receive? It helps if we look at three pieces of the puzzle: people, policy and programmes.

People, Policy & Programmes
A Resolution is a piece of written policy that contains clear commitments for countries to put into action regarding which health services they need to provide – services that are absent for many living with rheumatic fever or RHD.

The adoption of a Resolution on RHD will ensure that there are people within WHO working on this disease, including those working in related areas such as maternal and child health. It will also increase recognition of those who matter most – people living with RHD – and increase support for overlooked health workers delivering vital services.

Secondly, we need governments to have plans and policies that set out how they will prevent and control RHD. The current draft Resolution helps Ministries of Health to do just that, by highlighting priority actions for governments to take when developing national strategies.

What Next?
Through our #TimeToTackleRHD campaign, RHD Action will be advocating to governments ahead of the World Health Assembly to support the adoption of the Resolution in May.

This is where the whole RHD community can get involved: you can download our campaign resources from the RHD Action website, which include summaries, timelines and a template letter. And please don’t hesitate to get in touch with any updates from your own advocacy efforts at resolution@rhdaction.org