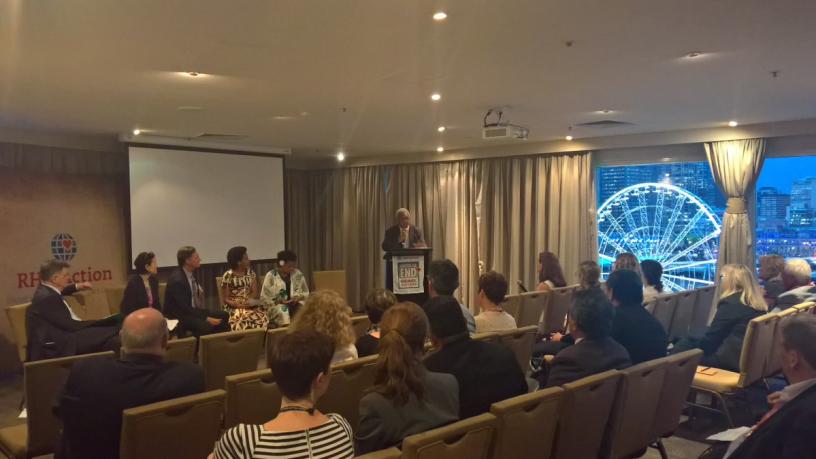 Co-Chair Hon Nandi Glassie, Minister of Health, Cook Islands speaks to the burden of RHD in the Western Pacific

Featuring a panel of representatives of the RHD patient community and senior government and WHO delegates, the Reception offered an opportunity to raise awareness of the regional burden of RHD ahead of discussions on the Rheumatic Fever/Rheumatic Heart Disease resolution at the World Health Assembly in Geneva in May 2018.

Professor Jonathan Carapetis, Co-Director of RhEACH (a founding member of RHD Action) moderated the event, and set the scene using a video produced in New Zealand about living with RHD. Professor Carapetis then invited Dr Stewart Jessamine, Co-Chair of the RHD Reception and Director of Protection, Regulation and Assurance at the New Zealand Ministry of Health, to provide an update on progress towards the Resolution.

The panel discussion followed, commencing with a focus on the lived experience of rheumatic heart disease. Ms Buli Wainiqolo, who lives with rheumatic heart disease and is a vocal advocate for RHD control in Fiji, emphasised the importance of early diagnosis and treatment, particularly adherence to ongoing treatment with regular penicillin injections. Mrs Phyllis Tokarua of Fiji, whose son has RHD, echoed the importance of support from family members and the services provided by the Fiji Ministry of Health that enable continuity of care.

Panel member Hon Minister Nandi Glassie, Minister of Health of the Cook Islands, described the considerable impact of RHD for people in the Pacific Islands, including the difficulties accessing surgical care and the challenges of preventing the disease through antibiotic injections. In some countries surgical transfers for international heart surgery consume a large proportion of the health budget.

Following the discussion of the human toll and financial costs of RHD, panel member Professor Brendan Murphy, Australia’s Chief Medical Officer, addressed the considerable burden of RHD in Aboriginal and Torres Strait Island Australia. He outlined the importance of primordial prevention, including access to appropriate housing and medical care.

Dr Hai-Rim Shin, head of the NCD program for the Western Pacific Regional Office of WHO, spoke about the priorities for RHD control in the region. Dr Shin reported that WHO is supportive of the growing momentum for RHD control, including a plan to update clinical guidelines. She reiterated that engagement and commitments from countries to support the resolution are important steps to be able to scale up technical support.

In closing, Professor Carapetis asked Buli Wainiqolo and Phyllis Tokerua what they would like to see happen to address RHD in the region. Phyllis Tokerua responded by reiterating “this is a preventable disease; doctors and health ministers know what we need to do to end this disease for our families and communities.” She then called on other countries in the region to support the RHD Resolution, and to follow the example of Fiji, which has a well-established RHD control program and has taken a leading role among Pacific nations.

Read more about the Rheumatic Fever/Rheumatic Heart Disease Resolution at the World Health Assembly in 2018 and see how you can be involved.